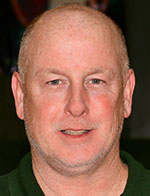 Coach Adams in originally from Franklin, PA and a graduate of Rocky Grove High School. Coach Adams graduated from Slippery Rock University and moved to Wellsboro in the early 1990's where he began coaching basketball under Keith Tombs and was the Varsity baseball coach from 1993-1996.

Following the 1994-95 basketball season, Coach Adams took over the program until 2010-11 where he won three NTL West Championships, one NTL overall Championship, one NTL Regular Season Co-Championship, one District 4 Runner-Up, and compiled over 200 Varsity wins and a 31 consecutive NTL game win streak over a three year period. Coach Adams returned as Head Coach after a 10 year hiatus and the team posted a 12-10 Regular season record qualifying for District 4 playoffs.

Coach Adams has coached Wellsboro's Minor baseball and softball programs from 2010-2013, has been a Wellsboro Small Fry head coach at the various levels from 2010-2017, managed the Wellsboro baseball 9 and 10 All-Star teams from 2014-2015, winning a District Championship in 2014 and were runner-ups in 2015, and managed the Wellsboro baseball 11 and 12 All-Star team in 2016. Coach Adams was also the Hustler Travel Baseball Team Coach. His 8u, 9u, 10u, and 12u teams won the Curwensville and St. Marys Tournaments in 2012 and 2013, finished third and two runner-ups with 10U Team in 2014, won first place in Renova Tournament 2015, won first place in Liberty Arena Winter League (2016), won first place in Wellsboro Spring Bash and Harrisburg In the Net Summer Classic (2016), and took home two third place finishes in Exeter and Windber (2016).

Coach Adams has had various players go on to attend and play College athletics. Coach Adams is the Principal at the Charlotte Lappla and Don Gill Elementary Schools and lives in Wellsboro with his wife, Peggy, and children, Ryann and Connor.

Hornets pull away late for Senior Night win over Towanda.

Hornets escape Towanda with a win.

Hornets pick up first win of the season over Canton, 72-64.

Hornets roll past Williamson, improve to 3-1.

Hornets pick up pair of wins over CV.