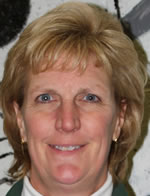 Coach Grab is in her second season as the Head Coach for Wellsboro Girls' Basketball after coaching nine seasons at the Rock L. Butler Middle School in Wellsboro. She has worked with many fine Assistant Coaches: Kristen West, Sue Melanson and Jodi Weider.

Coach Grab is a native of Ridgewood, New Jersey and was one of eight children, (all basketball players), born to Joseph and Anna Mae Donovan. Coach Grab played basketball at Paramus Catholic Girls High School in New Jersey and then played four years at the Pennsylvania State University. After graduating with a Bachelor's Degree in Social Welfare from PSU, Coach Grab completed her Master's Degree in Social Work at Marywood University in Scranton, PA.

Married in 1989, Coach Grab and her husband, John, moved to Tioga County in 1995 and built their home in Wellsboro in 1999. Since then, the Grab family has expanded to include Jessica, age 12, Joseph, age 8, two dogs, two cats, two horses and a goldfish! Coach Grab is in her fifth year as the Director of the Wellsboro Montessori Children's Center.

Coach Grab gets tremendous satisfaction from teaching the game of basketball. Her coaching mentors are her sister, Anne T. Donovan, who is currently the Head Coach at Seton Hall University, and Dr. Rose Marie Battaglia, a well-known basketball coach in New Jersey. One of Coach Grab's most amazing memories related to basketball was travelling with her brothers and sisters to Beijing, China in 2008 for the Olympic Games where her sister, Anne, coached the US Women's Basketball Team to a Gold Medal.

Lady Hornets season comes to an end by Mt. Carmel.

Lady Hornets key second half rally for win at Liberty.

Hornets put up fight, but fall to Lewisburg.

Lady Hornets get back on track vs. Galeton.

Another Close One for Lady Hornets.

Lady Hornets come out on top against Liberty.

Disappointing Night in the Valley for Lady Hornets.