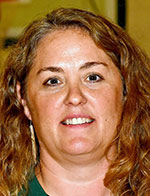 Coach Tombs is a graduated of Wellsboro Area High School, where she was a 1,000 point scorer and school record holder for most 3-point shots made. Coach Tombs was inducted into the Tioga County Sports Hall of Fame.

Coach Tombs played basketball at Houghton College, where she was a four-year starter and helped lead the team to two national tournament appearances. Coach Tombs graduated with a B.A. in Mathematics, and later earned her Master's degree in Management from Keuka College.

Coach Tombs currently lives in the Wellsboro area and works at Citizens and Northern Bank as a credit analyst.