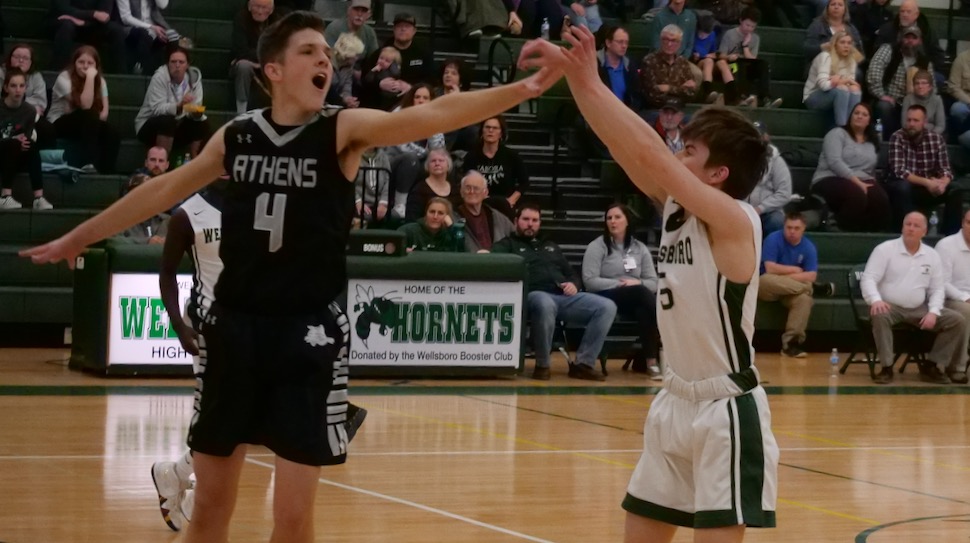 A comeback bid by the Wellsboro Varsity Boys Basketball team came up short in a 76-71 loss to Athens on Tuesday, January 28.

After starting out behind the eight ball trailing 8-1, the Hornets battled their way back into the game late in the opening quarter to trail the Wildcats, 18-14. Athens extended their lead in the 2nd quarter to make it a five-point game at halftime as they led 31-24.

As the 2nd half got underway the Hornets began to heat up and eventually tied, and took the lead, late thanks to a 20-15 quarter. Athens would go back up two late to close out the quarter and lead, 46-44. Wellsboro tied the game up a minute into the final quarter, then both teams continued to trade the lead until late.

With just over two minutes remaining Damian Hudson hit a 3-pointer to put Athens back up one at 62-61. Athens hung on for the win as they extended their lead at the foul line, shooting 13-for-14, while the Hornets were never able to cut the gap back to under 3 points.

"It was a tough loss. They (Athens) are leading the league and Wyalusing are leading the league and we played both of those teams strong, which is a bright spot, we're just having a little trouble closing out the game," head coach Steve Adams said. "They (the boys) played hard and Athens is a good team. We made some adjustments and the kids executed pretty well. We even put some things in kind on the fly and they were able to execute that, so that says a lot about how far they've come."

Three Hornets scored in double-digits on the night led by Joseph Grab with a game-high 31 points. Liam Manning had 17 and Conner Adams scored 13. Isaac Keane added 5, Darryn Callahan finished with 3, and Ty Morral rounded out the scoring with 2.

Wellsboro won the JV game 30-19 for their 9th win of the season. Freshman Peyton McClure scored 9 and freshman Will Kibler added 7.

The loss drops the Hornets to 10-9 (7-6 NTL Large School Division). The team is back in action on Thursday, January 30 in Troy before hosting their rivals North Penn-Mansfield on Saturday, February 1.