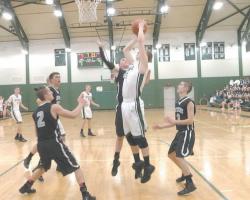 WELLSBORO -- The Athens boys outscored Wellsboro 30-13 in the second and third quarters as they picked up a 63-47 win on Tuesday to capture the NTL Division I title.

"I'm very proud of this team," Athens coach Cody White said. "They have stuck together throughout the season and their hard work has paid off. Every single player contributed to this title. The players who come off the bench played just as big a role as the guys who started. All of them deserve credit. I told them to enjoy this win and championship and this was just our first goal accomplished and to stay hungry because we aren't done yet."

Ausitn Lister led Athens with 14 points and Ryan Segar had 12, while Gavin Stein finished with 10 points.

Ethan Lane had nine points for Athens and Kalen Keathley had eight points.

Daniel Joyce had five points for Athens and Aaron Barry had three points, while Joe Moyer had two points.

Jacob Singer had nine for the Green Hornets, Dawson Prough had eight, Quinn Henry had four and Brandon Lamphier had three points.

Wellsboro won the JV game 54-24. Andrew Brelo led Wellsboro with 12 and Brandyn Tuttle had 11, while Gavin Stein had 14 for Athens.

The Wolverines got a career-high 25 points from Jon Ward as they improved to 18-0 on the year.

Ward added nine boards for Waverly and Peyton Miller and Hunter Bodine had 11 points and four assists each.

Jeff Mitchell had eight points and Zach Van-Houten had seven.

Waverly is at Dryden on Friday and then the following Friday they face Dryden again at 8:00 p.m. at Tomkins Cortland Community College for the IAC title.

With the win, along with Wellsboro's loss to Athens, the Tigers clinch a shot in the NTL Showdown. Mansfield will be at CV next Wednesday, while Athens will host NEB.

Nick Kasper had 12 for the Tigers and Derrick Herbst had 11, while Brock Burleigh had 10 points.

Nathan Mahonski, Justin Kling and Joel Whitteker all had two points for the Tigers.

Nick Innocenzo and Troy Pierce each had 10 for Towanda, Jarod Boardman had six and Shane Martin had three points.

The Trojans outscored Wyalusing 26-13 in the second half, including 10-5 in the fourth, to rally for the win.

Wyalusing led the game 34-25 at the half, before Troy rallied.

Anthony Deitrick had a 23 rebound game, along with seven points for the Trojans.

Clark Jackson had 13 points and Jah Wallace finished with 12 points.

Nate Martin had six points and Sean Mosher had five, while Seldon Rogers had four and Alex Butcher had two points.

Keshon Gardner had eight for the Rams and Will Martin had seven, while Hunter Brewer had four and Jon Morrison had one point.

The Redskins outscored Williamson 13-7 in the second half to pull away in the win.

Noah Ackley had 13 points and Nate Sweet had 10 points and two assists for Sayre.

Williamson got 16 points each from Matt Dodson and Colin Heilbrun, while Jon Baker had eight points.

Mike Snyder and Carleton Bell had two each for Williamson.

The Panthers got 13 points from Austin Senn-Bishop as nine players scored in the win.

Zak Smith and Nike Geiser had nine each for the Panthers and Michael Wallitsch and Nate Watkins each had seven points.

Garret Smith and David Ford had six points each and Tommy Rought had four, while Nick Vrable< had one point.

Byron Matthews had 14 points to lead Canton and Ridge Moore had seven points.

Michael Smithers had three and Malachi Washington, Kobe Walker and Logan Route all had two points.

Northeast Bradford hosts Williamson on Thursday for their senior night.

Colton Vinluan had a career-high 26 points to lead the Indians to the win.

Bryant Painter had 22 for Cowanesque Valley and Tyler Melko had 14, while Caleb Fitzwater had six points.

Darrell Carroll had 25 to lead Liberty and Garrett Bickhart had 11.

Gunnar Rice and Tyler Boyer had three each for Liberty and Tyler Repard had two points.

The Tigers got 22 points from Nick Klossner in the loss.

Connor Hutchinson had 10 points for Tioga and Zach Hutchinson and Nick Cotto had seven each, while Tyler Whitmore had two points.

Tioga won the JV game 62-48 with Pierce Hendershot leading the Tigers with 25.